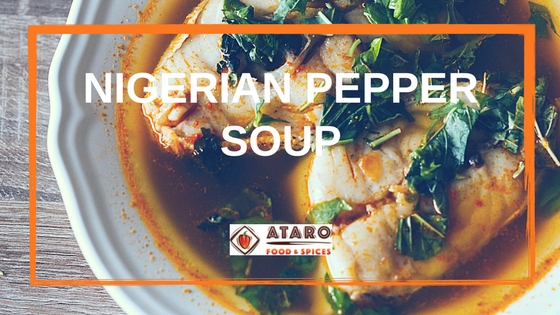 It is a universally acknowledged fact that soup is food for the soul. There is nothing as comforting as a steaming bowl of freshly made soup on a cold and rainy day. There are a few different soups that can be found in Nigeria, but the most popular one is pepper soup.

For Nigerians, pepper soup might as well be a potent magic potion. It is the first home remedy that is suggested to you when you complain about a physical malady, no matter what the illness happens to be! If you are lying in bed sick, then your Nigerian neighbour might just send over a pot of pepper soup just for you!

Every household in Nigeria has a different recipe for pepper soup. However, all of them invariably involve whipping up an aromatic pot of broth that is seasoned with a number of spices that are uniquely Nigerian. Ataro Foods & Spices’s pepper soup spice is a worthy addition to your pantry if you are someone who makes this soup often.

Pepper soup can be made with beef, chicken or fish. For chicken pepper soup, an indigenous chicken breed is normally recommended over the more commercially available broiler type of chicken. This is because, although the meat is a bit tougher (and lesser) in an indigenous chicken, the flavour that the bones impart to the broth is simply unmatchable by broiler chickens.

However, if you are not able to get your hands on some indigenous breed, then you can of course make this pepper soup with broiler chicken as well. Do note that the cooking time will be longer for indigenous chickens than for broiler chickens.

Beef pepper soup is usually not just made with pieces of beef in Nigeria. Rather, other body parts such as intestines are also thrown in. While there is no denying the fact that this definitely improves the richness and flavour of the broth, sadly, not everyone is keen on feasting on beef intestines! In such cases, the soup can be made with meat and bones alone. You can make this soup in large quantities and freeze the remaining. Then on days when you are not in the mood to cook, all you need to do is to take out a portion from the deep freezer, defrost and heat it up to enjoy a delicious bowl of pepper soup.

Fish pepper soup is something that I tend to make often because, unlike chicken or beef, fish cooks really fast. Hence it takes barely any time at all to come up with a big batch of tasty pepper soup when making it with fish.

The soup can be eaten by itself for a light and healthy meal. Or it can also be served with a good, crusty loaf of bread to soak up all the heavenly juices. Some people also like to eat it with rice or boiled yam.

If you are experiencing cold symptoms or the Flu, then the Nigerian pepper soup is your best bet to banish your sickness! Try it!

Ebere Akadiri
I’m a food entrepreneur, former restaurant owner and a food business trainer. I help food lovers and enthusiasts around the world to learn about the food and culture of West Africa, with a particular focus on Nigeria.